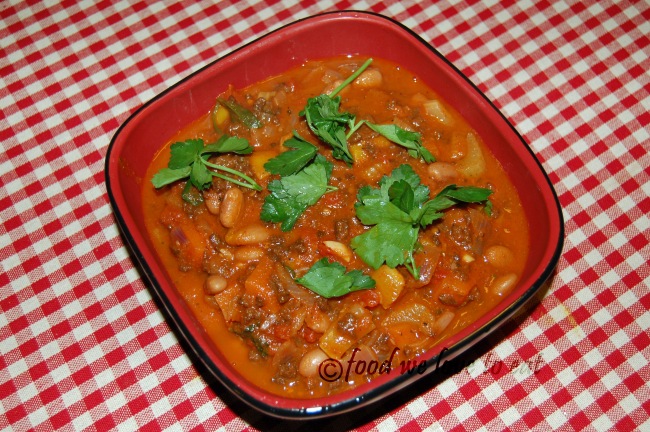 N: This is not just a chilli sans meat but one that deserve its own name.

This recipe is for two people and takes about 1 hour to cook. You can either serve it with rice, crusty bread, flat bread or if you are feeling enthusiastic make some cornmeal bread :-). The time estimations are with the assumption that you are using a pressure cooker to cook the beans.

I use pinto bean as the main ingredient. Pinto in Spanish means painted and when you see the bean you know. This bean is creamier than kidney beans, a staple of Mexico and is one of the three beans of burrito.

Talking of burrito reminds me that when I lived in Texas my friend Kaja would drop in at odd hours and we would go out and enjoy a burrito under the dark midnight Texan sky. Those were the days when I was a new immigrant and allured by the pleasures of  24/7 style of  American life did not bother to think about the implications of such a lifestyle on mental and physical health of a community.

Soak about 50 gms of Pinto bean per person overnight. Cook it in an open pan with plenty of water or in a pressure cooker. The bean is softer than kidney bean, so be careful with the cooker. Always throw away the water after cooking the beans. You can cook the beans in advance, drain them and store them in a fridge for about a week so that during the week you have the convenience that tantamount to opening a can of beans.

While the beans are cooking start working on the vegetables.

Chop 1 large carrot into small squares and add to the pan. Sweat the three amigos for about 10 mins.

Slice 2/3 gloves of garlic and one red/green pepper into small pieces.

Once the onions have started to look translucent add the garlic and the pepper. Sweat this again for about 10 mins. Add a few drops of water if necessary.

Open a tin to tomato or chop up a few good ones.

Check the beans. They should retain their shape but if pressed between fingers they should give way. Drain the water and the beans are ready to join the party.

Add the beans to the vegetables along with the spices – 2 tsp of coriander, 3 tsp of cumin, 1 tsp of sweet paprika, a pinch of cayenne pepper and 1 tsp of oregano.

Toss the ingredients so they can network with the other ingredients they have never met before. Add the tomato and cover it with water.

Bring to boil and simmer for about 15 mins.

Soak some minced soya bean for about 5 mins and then add it to the cauldron and further simmer for 15 mins. Check the seasoning and add salt and pepper as necessary.

Turn off the heat and allow it to rest.

If you have fresh coriander then add it for flavour. The ones in the picture are parsley, mainly added in a vain attempt to increase the froufrou of the dish, but I am not convinced that parsley is the best.