N: Spelt is a close cousin of the common bread flour and its history is as old as the wheat bread flour. But spelt almost disappeared from the diet of the western world when modern humans started using chemical fertilizers to manage yield. The myth is that because spelt needs less fertilizer than wheat it fell out of favour with the agro industry. Thanks to emergence of organic farming spelt is back in fashion so much so that demand of spelt is outstripping supply and the word on the streets of London is that certain restaurants are hoarding on this precious grain.

I bought my first rather expensive loaf of spelt from Waitrose mostly because, if I am honest, it had an exotic name but also because it had a sweet smell very different from a wheat bread. If you are looking for ways to make your house smell good without having to use artificial room sprayers, baking this loaf is one of them. The nutty aroma of spelt will fill up your senses not only when you bake it but also when you toast a slice.

Spelt has a low gluten content and hence making a 100% spelt can be difficult. I have seen, never tasted, 100% spelt loaves in good bakeries such as the Chough bakery in Padstow, Cornwall but I have never done one myself. I bake this simple 75% spelt flour bread every weekend and it is our staple for the week. At the beginning of the week we eat it untoasted with olive oil and as the week progresses we toast it and have it with honey or chocolate spread.

Mix the ingredients with about 240/250 ml of water and bring them together in a big bowl. The amount of water depends on the strength of white flour. If you are using wholemeal bread flour as well then you will need about 260 ml water. Once the flour comes together put the mixture on oiled surface and start kneading. Use a simple technique of stretching out the dough away from you and then bringing it back to yourself. Continue until your hand starts to hurt. In about 10/15 mins you should get an elastic dough.

Prove the dough in an air tight container for about 3 to 4 hours to allow for slow fermentation. If time allows you can also leave the dough overnight. At the end of the first proving cycle put the dough on a well floured surface and knock it back. Use all your strength to knock it back so that it is easy to shape the dough. Shape it into a small round loaf. Spelt tends to spread outward rather than upward when it proves so do shape it in such a fashion such that the final loaf is not too flat. The second proving should be for about 1 hour and no more. Cover it lightly with a cling film to avoid drying.

Turn on the oven and preheat it to 220°C. As the oven preheats get your dough prepared for the oven.  Spray it with some water, dust it with flour and cut a few slits with a sharp knife.

Take it out of the oven and leave on the rack to cool completely before you devour it. 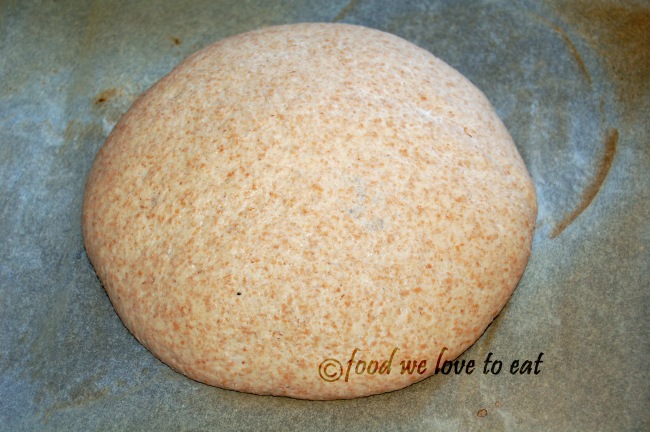 A: Here’s my nuggets of wisdom on bread baking:

The secret of preventing the bread going too dry: One of the potential problems of baking at high heat is to lose the moisture from inside the bread. The resulting bread could be very dry at the core. The best way to avoid this is to half fill a baking tray with cold water and place it at the lowest shelf of the oven at the same time you insert the prepared dough in the middle shelf. The water vapour created inside the oven results in a humid eco-system that keeps the inside of the bread quite moist.

The secret to a good crust: Instead of taking the bread out of the oven immediately after the baking is over, leave it to cool inside the oven with the oven door ajar. This helps the bread to cool down gradually at the same rate as the oven and results in a better crust. As spelt has less gluten than wheat, the crust will not be as robust as a white flour bread. But this trick will allow you to get the best crust possible with spelt.