N: When I first bought a packet of curry powder little did I know that I would find so many ways of using it. I bought it simply because I wanted to find its taste first hand. It does get a lot of bad press so much so that some self appointed guardians of traditional Indian food firmly believe that the sole responsibility of the corruption of Indian food lies on this British invention – the curry powder. 🙂

A and I are not pedantic in whatever we do and I can shamelessly say that I not only like the curry powder but have found numerous ways of using it and this recipe is one of them. The curry powder I use has the following though not sure in what proportion – corainder, fenugreek, turmeric, cumin, garlic, salt, chickpea, chilli, mustard, black pepper, fennel and star anise.

The recipe is inspired by my mother’s patla mangsher jhol made with meat (generally goat meat)  and unripe papaya. Marrow, much like papaya, not only absorbs the flavours of the stew but also renders an extra dimension to the stew.

This is a supper dish for a warm summer evening. I would not cook it in winter mainly for two reasons – for one the marrows in winter are not really that fresh and two I prefer a richer dish on cold winter nights. The proportions used in the recipe can server as a main dish for 2 or a side dish for 4. 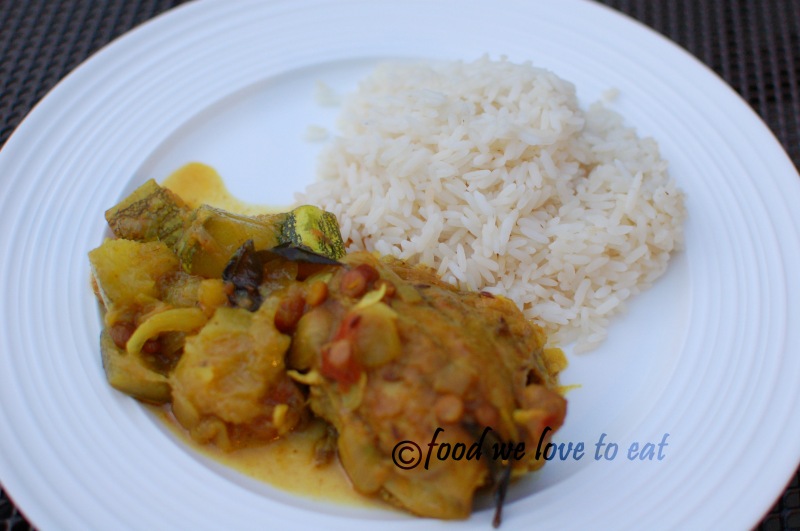 – I use 4 pieces of skinned chicken thighs but you can use drumstick as well. Rub the chicken uniformly with a mixture of 1 tbsp each of fenugreek and turmeric and set it aside.

– The marrow should be medium size as very big marrows tend to be bitter. Cut the marrow into two halves and chop one half into 1 cm cubes. We need just half the marrow for this preparation.

This is one recipe where I would advice you to get all the ingredients ready before you start to cook.

– Now sweat the onions with a pinch of turmeric and salt. Add a few drops of water if you feel that there is a risk of the onion sticking to the pan. After about 10 mins add the tomato and grated ginger. Sweat it for a further 5 mins.

– Take a separate small sauté pan and make the seasoning by warming up a tbsp of oil and adding all the seasoning spices to it. Turn off the heat as soon as the spices begin to sputter. Do not burn the spices. Add the seasoning to the main pan that has the onions and mix well.

– Add the chicken and allow it to simmer. Add a few drops of water if necessary but no more. A marrow is 95% water and if you add extra water it will become watery. Allow it to cook for about 20 minutes stirring it from time to time. You can see the stew forming with time.

– Add salt and freshly ground black pepper to taste and then allow it to rest for about 10 mins before you serve with American long grain rice. Resting will also improve the consistency of the stew.